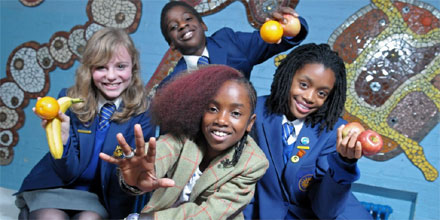 Akai, winner of Got to Dance is the ambassador for the British Heart Foundation’s Food4Thought campaign.

For the launch of the campaign, Akai attended Dunraven School in London, for a surprise performance

Video: Akai Crash the Canteen for Food For Thought

Akai said: “Almost one in three kids around my age is now overweight or obese. Food4Thought is about trying to deal with that problem and help kids to eat healthier foods and exercise more. ”

The British Heart Foundation’s Food4Thought campaign aims to encourage parents, children, teachers and politicians to all think carefully about the food the next generation are eating, and the amount of exercise they’re getting each day.

He continued: “I think it’s really important for people my age to think about how the food they eat now could affect their health in the future. If I didn’t stay fit and healthy I wouldn’t be able to keep doing what I love the most.”

Akai, 12, who was crowned champion of Sky1’s Got to Dance competition in 2010 is supporting this year’s F4T campaign. He recently appeared in the Horrid Henry and Streetdance 3D films. He will be starring in the up and coming Streetdance 2 3D film due for release in March 2012.

Recently Akai was the face of Disney’s Shake It Up: Dance Dance competition and won a young achiever award at the BEFFTAs.