Street Dance 2 3D: Behind the scenes of the sequel with George Sampson [video] 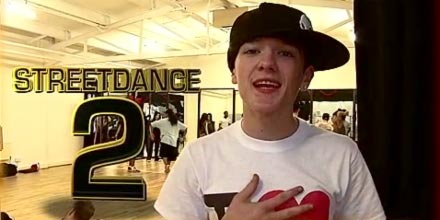 New StreetDance 2 3D behind the scenes footage has been released online by Vertigo Films, UK distributors of the StreetDance sequel, featuring George Samspon as host.

The short video includes Sampson interviewing the main cast members of the cast in the StreetDance sequel including the main characters Eva (Sofia Boutella) and Ash (Falk Hentschel), and appears to be the first in a series of short featurettes in the run up to the film’s release in March 2012.

George Sampson is to return in StreetDance 2 as the character Eddie, as is Akai who starred in a short cameo for StreetDance 3D, while Flawless is reprising their role as dance crew The Surge.

Video: Street Dance 2 3D: Behind the scenes with George Sampson

To watch this video, you need the latest Flash-Player and active javascript in your browser.

Filming for StreetDance 2 is now finished after wrapping in early October. The movie is now in the post production stages.

Co-funded with British Film Institute and BBC Films, Streetdance 2 3D will be distributed by Vertigo Films in 2012 in the UK. International sales are being handled by Protagonist Films.

According to the official Streetdance 2 press release