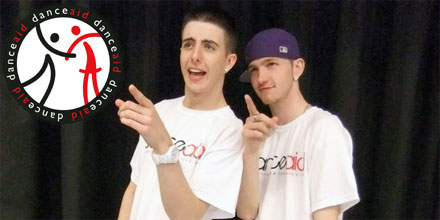 Twist and Pulse, Britain’s Got Talent 2010 semi finalists, are running the London Marathon to fundraise for dance charity danceaid.

The 2012 Virgin London Marathon takes place on Sunday 22 April 2012 leaving the street dance comedy duo two months to raise a target of over £4,000.

“This means the world to us (danceaid).  It is an incredibly tough challenge and potentially a risky one given the chances of incurring injury during such a long run,” said Laura Wilson, CEO and co-founder of danceaid. “They (Twist and Pulse) said ‘give us a challenge.’ So we gave them one.”

The London Marathon raised £51.8 million for charitable causes in 2011, which was a record figure for the annual 26 mile run.

Sponsors can donate money to the danceaid cause via the Virgin Money Giving page.

Video: Twist and Pulse doing it for danceaid

danceaid is a charity dedicated to transforming the lives of vulnerable children through dance, aiming to raise awareness of orphaned, poor and exploited children in the third world and the UK. In the past danceaid has been the official sponsor for the Peridot UK tour and is the official charity for the annual dance exhibition Move It and street dance competition United Dance Organisation (UDO), with patrons in all disciplines of dance, from tap to ballet and contemporary to street dance.

Some of danceaid‘s patrons include a range of street dancers, crews, and choreographers including Turbo, The A-Team, Chris and Wes and Plague.

Twist and Pulse is a street dance comedy (‘streetomedy‘) duet made up of Glen Murphy and Ashley Glazebrook who emerged as runners up on Britain’s Got Talent 2010. Twist and Pulse released a single, Jump on iTunes, and is set to start up an online community for dancers.

Other charitable work Twist and Pulse have done include fundraising for Fairbridge.