Street Dance 2 reviews and ratings – what the critics thought 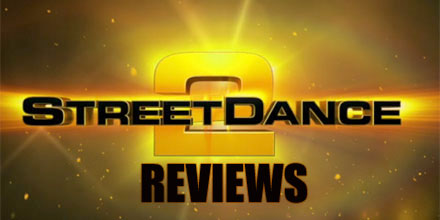 Street Dance 2 3D, the sequel to the 2010 movie Street Dance 3D is released this weekend (Friday 30 March) in cinemas across the UK, distributed by Vertigo Films.

Below is a selection of reviews for Street Dance 2 3D from British newspapers, magazines, and leading online critics, plus star ratings and short extracts.

Of the selection of reviews ratings hover around three out of five stars with most critics highlighting the storyline, plot gaps and its choice of international locations for a British film as its downfall.

The Sun was the most positive, awarding three out of five stars and calling it “enjoyable cheese if street dancing is your thing” while The Independent was the most critical, awarding one star and criticising the supporting cast of dancers as actors.

Reviews open in a new window

Too Much Flavour
It is satisfying to see Akai given a bigger part after his cameo was squeezed into the first film. Something in me wishes they had dispensed with this film and made the one about how Akai got to be so good, his lines are perfectly delivered and his dancing delights. Perhaps the next Street Dance movie needs to focus on the next generation because this current move certainly doesn’t seem to have the level of box office appeal that made the original such a hit.
Read review

Digital Spy 2/5
There’s evidently a big audience for a movie like this, so it’s a shame that the filmmakers aren’t ambitious enough to step outside of the dance genre’s well-worn cliches. The only thing striking about StreetDance 2 is its mediocrity.
Read review

Empire 2/5
There’s nothing to make this feel European rather than generically American bar the scenery. Perhaps this is a grab at the US market, but it would have done better to stick with some authentic local flavour to set itself apart.
Read review

The Guardian 3/5
There are no great surprises, although they need some new choreographical ideas for those various poses of incredulous scorn and contempt while the opponents are dancing.
Read review

The Independent 1/5
If the cast’s acting were even a tenth as good as their dancing, all might be well. As it is, every time one of them speaks it’s pure agony on the ears. They can’t even stare convincingly.
Read review

The Sun 3/5
While the story is pure cheese, it’s enjoyable cheese. If streetdance is your thing, this will go down a treat.
Read review

The Telegraph 3/5
A new emphasis on Latin dance means the choreography is often stomach-flutteringly seductive, but it’s hard not to regret the loss of the first film’s uniquely British flavour. The script, plot and acting are all dance-movie standard, which is to say they’re hideous.
Read review

Time Out 2/5
Aside from a few comic set-pieces and routine romance, the focus is squarely on the dancing, which looks pretty impressive in 3D.
Read review

Total Film 2/5
The homegrown appeal of StreetDance gets lost in a sequel with one foot across the pond, the other over the channel. At least the writer’s English.
Read review

Do you want your review added to this list? Leave a comment with a link in the box below for consideration!