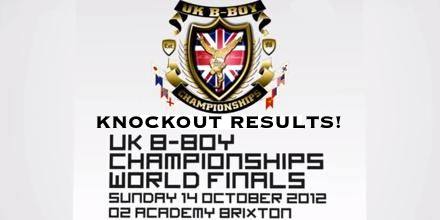 The UK B-Boy Championships 2012 knockout rounds took place today at the Islington Academy, London, to decide which solo dancers qualified for the world finals on Sunday.

The remaining battle stages will take place at the world finals on Sunday alongside the top eight b-boy crew battles.

Winners are highlighted in bold

The UK B-Boy Championships is an annual b-boy (breakdance) battle starring the world’s best breakers and poppers battle at the world finals at the Brixton Academy, London.