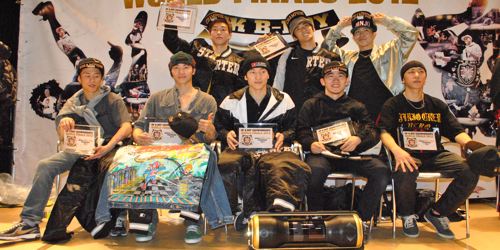 Jinjo Crew of Korea is the world crew champions of the UK B-Boy Championships 2012 world finals today at the Brixton Academy in London.

They defeated Found Nation of Japan in the semi finals to face Soul Mavericks of the UK in the finals where they emerged winners.

Solo b-boy champion was Kareem against Niek in the final, the former having defeated Moy in the semi finals.

Greenteck won the popping against Brooke in the final as a result of defeating Gator in the semis and Mufasa emerged as winner in the hip hop battles.

Battle videos for the final rounds will be available online soon.

Winners are highlighed in bold with scores according to how many judges voted for or against them.