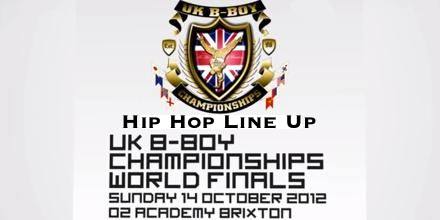 The line up for the UK B-Boy Championships hip hop battles has been announced ahead of the knockout stage at the O2 Academy Islington today, Saturday 13 October.

10 dancers are lined up for the knockout stage on Saturday made up of internationally qualified dancers. There are six open spaces for battlers to sign up.

Buddha Stretch, Joseph Go and Physs will judge the battles.

The complete top 16 dancers will battle on Saturday at the O2 Islington Academy up until the semi finals stage, which will take place on Sunday 14 October at Brixton Academy

Tickets for the UK B-Boy Championships 2012 World Finals can be bought online now from Ticketmaster.

It completes the line up for all categories at the world finals.

The UK B-Boy Championships is an annual b-boy (breakdance) battle starring the world’s best breakers and poppers battle at the world finals at the Brixton Academy, London.

The competition’s biggest attraction is its b-boy crew battles with Vagabond Crew becoming the UK B-Boy Championships 2011 world champions. Recently the full b-boy crew for the world finals and popping line up were also announced.