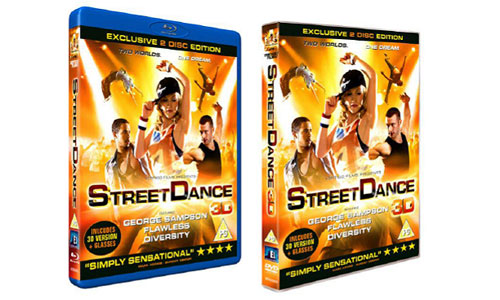 The release date of the Streetdance 3D DVD and details of disc extras has been announced. The film will be released as a two disc edition on Blu-ray and DVD on 27 September 2010, released by Vertigo Films and distributed by Entertainment One.

The DVD is priced £19.99 for the DVD and £24.99 for the Blu-ray edition, which will include both 2D and 3D versions of the film on the disc and include four pairs of 3D anaglyph glasses inside the box.

Special features will include a ‘making of’ documentary, cast interviews, footage of the world premiere at Leicester square and videos of the nationwide Streetdance 3D tour.

Streetdance 3D follows the story of Carly (Nichola Burley) and her dance crew Breaking Point as they work their way towards the UK Street Dance Championships featuring appearances from groups like Diversity, Flawless and Peridot, and backed by a supporting cast of UK street dancers including Lil Steph and Brooke Milliner.

Over its opening weekend Streetdance 3D earned £1.8 million at the box office.