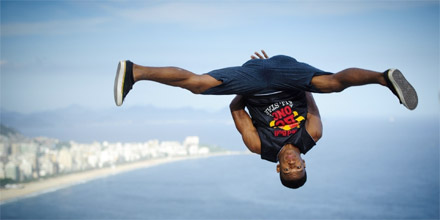 The video was created over four days with six of the Red Bull BC One All Stars: current BC One world champion, B-Boy RoxRite (US), B-Boy Ronnie (US), B-Boy Cico (Italy), B-Boy Pelezinho (Brazil) and All Star new additions B-Boy Neguin (Brazil) and B-Boy Lil G (Venezuela) to create content using a Phantom Gold camera and a bespoke 180 degree GoPro rig that creates a vertical and horizontal bullet time shift in real time.

See the b-boy bullet time shift in this video [sponsored]


It was announced earlier this year that the Red Bull BC One 2012 World Finals will take place in Rio De Janeiro, Brazil with qualifiers taking place internationally across 60 countries. Six continental qualifiers are currently taking place in USA, Russia, Mexico, Netherlands, Egypt and New Zealand ahead of the Red Bull BC One 2012 World Final in December where the top 16 b-boys from each qualifier will battle for the title.

Last year RoxRite was the Red Bull BC One 2011 Champion after winning at the world finals in Moscow, Russia, defeating Lil G in the finals.

Red Bull BC One is an annual solo b-boy (breakdance) competition organised by Red Bull for the world’s most elite b-boys that takes place internationally with the world finals taking place in a different city each year.

Past Red Bull BC One winners include B-Boy Neguin, B-Boy RoxRite and the competition’s only two-time world champion, B-Boy Lilou.