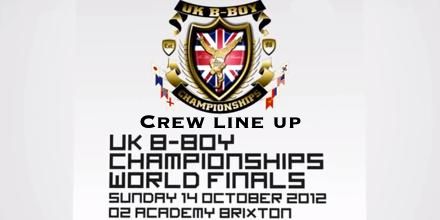 The crew line up for the UK B-Boy Championships 2012 world finals was announced recently including eight crews from the international qualifiers.

The UK B-Boy Championships 2012 international qualifiers took place from April to September to complete the line full up.

Most recently Arcopom, Originals and Dead Prezz joined from the Notorious IBE 2012 European qualifier in Holland earlier this month. Jinjo joined the championships line up after winning the R16 Korea qualifier in June. The qualifying UK crew is Soul Mavericks after winning the Regional Conflict 2012 qualifier in London in August and French champions Vagabond Crew will also return to defend their title.

The line up for the solo b-boy, popping and hip hop will be announced shortly.

The UK B-Boy Championships is an annual b-boy (breakdance) battle starring the world’s best breakers, lockers and poppers battle at the world finals at the Brixton Academy, London.

Organisers recently announced Pioneer STEEZ boomboxes were to become the official partner for the competition.