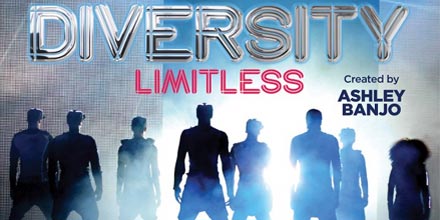 Diversity has announced a new show for 2013: Diversity Limitless, a 12 day UK tour taking place across three weeks in December.

The unexpected announcement came today announced on Twitter a few days after their Royal Variety 2012 performance and a few weeks after the release of their last show, Diversity Digitized: Trapped In A Game, on DVD.

We've got a nice surprise for you all today guys! Keep your eyes open on twitter!

Diversity Limitless is a follow up to 2012’s Diversity Digitized arena tour, created by crew leader Ashley Banjo. All other details about the show’s story line have not been revealed.

Diversity won Britain’s Got Talent in 2009 and later went on to star in the Street Dance 3D movie as a cameo appearance. Later on Ashley Banjo was recruited as a judge for Got to Dance on Sky One and the group released Diversity: Dance Fitness Fusion on DVD.

Ashley Banjo also broke off during Got to Dance to film a spin off Ashley Banjo’s Secret Street Crew ahead of their last Diversity: Digitized arena tour.

A Diversity movie, Diversity Rise, was also recently announced with the backing of studios Pathe International and Warner Bros UK behind it, set to shoot in April 2013.