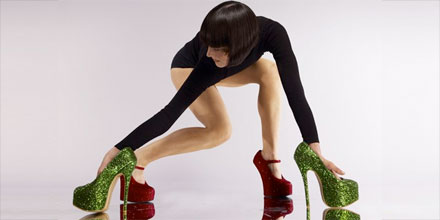 Contestants from the 2010 series of BBC So You Think You Can Dance and the show’s choreographers are due to be reunited for the production of Shoes at Sadler’s Wells Theatre, London (click here for tickets).

Featuring a cast of twelve dancers and consisting of over 250 pieces of footwear set to a bespoke musical soundtrack, Shoes is directed by Stephen Mear and will run a limited show from 3 – 11 September.

Sadler’s Wells invited director of Zoonation, Kate Prince along with Sidi Larbi Cherkaoui, Aletta Collins, and Mark Smith to choreograph pieces for the show to such songs titles as The Psychology of Purchase in the Temple of Retail, Desire: The Brand, and Footish Fetish.

The dancers in the show from So You Think You Can Dance are Drew McOnie, Chloe Campbell and Mandy Montanez.

The show is then due for an international tour in spring 2011.

Behind the scenes of Shoes video

Kate Prince’s involvement with shoes comes after Sadler’s Wells announced Zoonation as a new resident company in July. The relationship between the two companies was established in 2002 when Zoonation first performed their piece Boxbeat at the Lilian Baylis Theatre. The popular West End hip hop musical Into The Hoods was also premiered at the Peacock Theatre, Sadler’s Wells’ theatre in the West End.