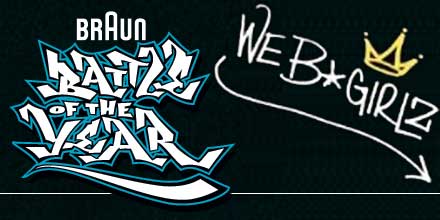 The full line up for We B*Girlz, the 2-on-2 b-girl battle at Battle of the Year 2011 has been announced ahead of the world finals in Montpellier, France.

Eight international preliminaries ahead of the finals have taken place, including a qualifier at The Notorious IBE in the Netherlands where B-Girl Rose and B-Girl Pauline emerged as We B*Girlz Netherlands winners.

Update: We B*Girlz Battle of The Year winners Lil FeNeSiS and yuRie (Japan)

We B*Girlz is an organisation that presents independent b-girls and females in hip hop, established by Martha Cooper and Nika Kramer.

It is hoped that 16 worldwide qualifiers will take place in 2012 with a We B*Girlz UK qualifier planned.

The battles will be judged by Poe One, Movie One and B-Girl Valentine.

We B*Girlz Battle of the Year b-girl line up

The We B*Girlz final takes place on November 18 at the Rockstore in Montpellier at 21:30