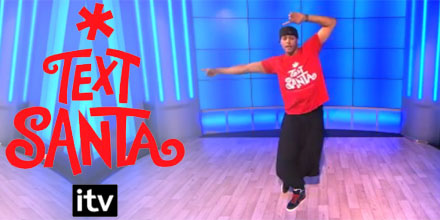 The Text Santa choreography was created as part of a Guinness World Record attempt that took place at the end of November at The Kia Oval Cricket Ground, Vauxhall, London, for the ‘Largest Gathering of People Dressed As Santa Claus.’

The routine of people dancing to the Text Santa dance choreography to Santa Clause is Coming to Town in Father Christmas costume was filmed for ITV1’s Text Santa fundraising appeal.

Text Santa is a major new ITV initiative that embodies the spirit of giving at Christmas time. Text Santa will culminate in two entertainment spectaculars featuring major names from television, music and showbusiness on ITV1.

Tonight’s show, hosted by Phillip Schofield and Christine Bleakley, is billed featuring a ‘unique rendition of Santa Clause is Coming to Town with Torville and Dean, The Wanted and Diversity.

Text Santa: The Launch is on ITV1 at 9:30pm on Sunday 11 December with a finale scheduled to take place close to Christmas.

Currently Ashley Banjo is to star as a judge in Got to Dance 2012 returning on 1 January 2012 and the planned Ashley Banjo’s Secret Crew on Sky One.

Meanwhile, Diversity is preparing ahead for an 11 date UK tour of their new show, Diversity: Digitized throughout March and April 2012.