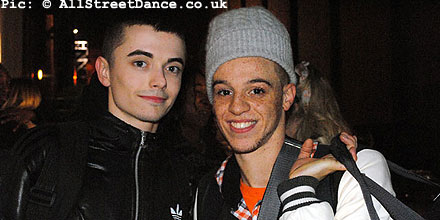 Chris and Wes Let’s Do This, a new TV series starring the Got to Dance 2011 winners will start on Monday 19 December at 6pm on Sky One as a nightly ten-part series, as confirmed by All Street Dance in October.

The TV series will follow the dancers every day with each episode driven by a new milestone in the dance careers, from a looming professional performance or a significant personal achievement.

Chris and Wes: Let’s Do This was commissioned by Sky in October as part of a £14 million investment into original British television from the broadcaster by 2014.

Chris and Wes won Got to Dance 2011 in February. The Chris and Wes: Let’s Do This show will bolster Sky One’s investment along with Ashley Banjo’s Secret Street Crew which is scheduled for broadcasting in late January 2012.

Chris and Wes will also be joining presenter Will Best as backstage presenters on Got to Dance 2012.

#Chris and Wes #Chris and Wes Lets Do This #Got To Dance #Sky One
Previous Post
Jump Off street dance battles return to Fabric London with £10,000 prize for winning crew
Next Post
Ashley Banjo and Diversity promote Text Santa charity initiative with ITV1