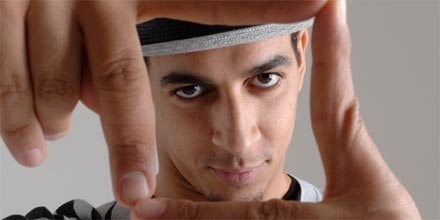 Breathe the Beat, an initiative set up by DanceXchange for the Cultural Olympiad in the Midlands continues this weekend throughout June, July and August.

Breathe the Beat is an online initiative inspired by the London 2012 Cultural Olympiad starring the popper Salah who is currently dancing with Cirque du Soleil on its Michael Jackson production Immortal World Tour.

Breathe the Beat roadshow was set up in summer 2011 using a series of online video tutorials using his PABE (Popping, Animation, Boogaloo, Effect) style to allow users to learn his moves and styles and gain an insight into his inspirations from interpretations of everyday life using visual imagery, encouraging dancers to enter videos of themselves dancing after watching the tutorials.

Brother and sister Brooke Milliner and B-Girl Roxy of Plague, the Hip Hop International world dance champions 2011, will be touring the Midlands for the Breathe The Beat roadshow which continues this weekend in Leamington.

The Breathe the Beat roadshow will embark on ten more dates across the Midlands throughout summer which can be found below.

Breathe the Beat is part of the Outdoor Dance Programme, led by DanceXchange, in partnership with Dancefest, Dancescape and Dudley Performing Arts. The programme has been funded by Arts Council England with support from Legacy Trust UK and Advantage West MIdlands as part of the Dancing for the Games programme, which is part of the London 2012 Cultural Olympiad.