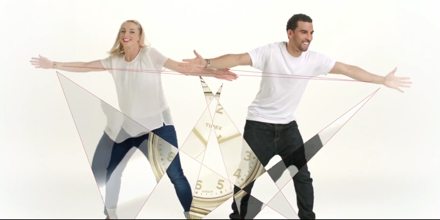 The Style of the Times viral was created by Deadpan Films for Timex watches in collaboration with Stuart Bishop of Rudeye dance agency and uses popping and tutting to convey the message of the brand.

Most recently Lizzie Gough was a judge on Alesha’s Street Dance stars on CBBC and also starred in a Virgin Media Britain’s Got Talent advert. She will embark with ZooNation on the Some Like It Hip Hop national tour this week, starting at the Peacock Theatre in London.

Bly Richards was the winner of MTV’s Bump’n’Grind in 2005 and is also a dancer with Plague dance crew who are Move Like Michael Jackson finalists and Hip Hop International 2011 world champions.

Timex has also produced a behind the scenes video showing how the viral was put together.

Video: Timex Style of the Times behind the scenes

Rudeye is a professional dance agency representing and supplying the dancers and choreographers in for all aspects of the dance industry including music videos, TV, trade and fashion shows, concerts, commercials, virals, corporate events, film and print. Their clients include BBC, ITV, Sky and more.

Rudeye recently released an iPhone app to promote the dancers and models on its agency using songs from the user’s iTunes library as a soundtrack and was also the first company at Pineapple Dance Studios to devise a flash mob dance class.