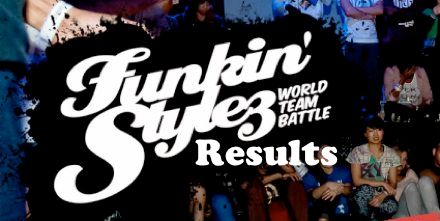 The Funkin Stylez UK 2012 qualifier took place today at Plan B, Brixton London ahead of the world finals in Germany in December.

Qualifiers for the world finals took place in hip hop, house and popping categories with the addition of breaking, krump and waacking as Street Talent categories (with no international qualification).

The Funkin Stylez winners have won flights and accomodation for the world finals; breaking waacking and krumping win a £100 cash prize and goodies.

Winners in each category are highlighted in bold with the judge’s scores next to them with an X denoting a tied vote.

Me Against the Music
Talent, Abdanger, Marcio (and Dickson?)

Funkin Stylez is a dance battle that takes place annually in Berlin, Germany where nations from all over the world compete in the styles of hip hop, house, locking, popping and a 5 member mixed styles crew battle.