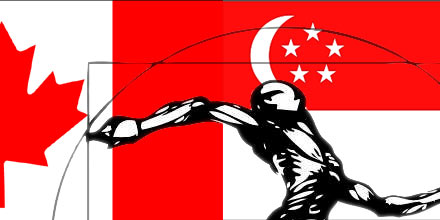 The Juste Debout 2012 international qualifiers continued last week in Singapore and Montreal, Canada, adding to the list of dancers competing at the world finals in Paris on 11 March.

Singapore and Canada preliminaries are the third and fourth of 14 regional preliminaries for the annual upright styles hip hop dance battles.

Battle categories included 2 on 2 locking, 2 on 2 popping, 2 on 2 house, and 2 on 2 hip hop; the Canadian preliminaries also included eliminations for toprocking and solo experimental battles.

Juste Debout, or ‘just upright,’ when translated from French, is an annual street dance competition held in Paris in the disciplines of hip hop, experimental top rock, locking, popping and house dance.

The next international qualifier in the Juste Debout Steez 2012 tour will be Stockholm, Sweden.

Juste Debout UK will come to London on Saturday 25 February, the second year the event has been held in England.