Vagabond Crew of France are the winners of Battle of the Year 2012 crew battles that took place tonight in Montpellier, France.

Their victory makes them three times winner of Battle of the Year overall and champions for the second year in a row.

B-Boy Niek, one of the Battle of the Year 2013 judges, commented on their win: “It’s well deserved. You could see the difference in the quality of their show. It really stood out. And they didn’t make any mistakes in the final battle.”

Following Battle of the Year’s decision to impliment a new semi finals format structure, this year six b-boy crews qualified following the showcase performances with two going straight to the semi finals and four others battling for the second semi final bracket.

Thomas Hergenröther, organiser of Battle of the Year, said: “Hip-hop is all about the battles. It’s what the guys want to do and what the fans love to watch. Having six makes it much more interesting!”

Flooriorz of Japan and Vagabond Crew of France were the two top scoring crews in the showcase rounds.

See also these related new stories:
Full Battle of the Year 2012 b-boy crew line up
and
Solo b-boy battle and We B*Girlz 2012 results 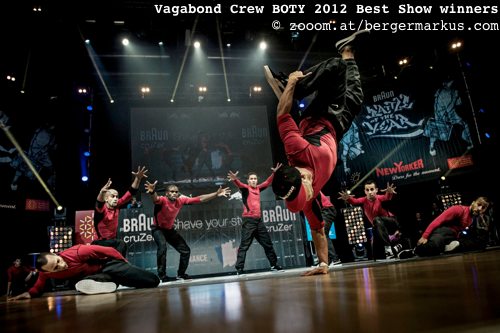 Winners of each round are highlighted in bold

About Battle of the Year