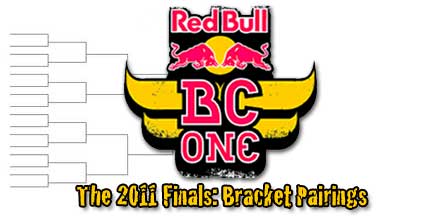 The Red Bull BC One 2011 Russia battle bracket pairings were announced last night ahead of the world finals today.

The 16 b-boys will battle one another in a series of knockout battles today at 16:00 GMT (20:00 Russia) to decide the new champion.

The winner of each bracket will be paired with the winner of the battles in the bracket below it, tournament style, until a winner emerges in the later rounds.

Update: RoxRite is Red Bull BC One 2011 winner

The current reigning Red Bull BC One 2010 champion is Neguin, who will be defending his title, will battle either Vero of Jinjo Crew, Korea, or Niek (formerly Just Do It) of Rugged Solutions, Holland, who Neguin knocked out in last years finals, depending on the outcome of the first round.

Stastically, according to predictions compiled by All Street Dance, 2006 champion Hong 10 is the most popular to win the title this year.

Red Bull BC One is an annual one-on-one b-boy battle for 16 of the world’s most elite and unique b-boys held in a different city every year. Last year the finals took place in Japan.

The Red Bull BC One dancers arrived earlier in the week to warm up at an underground bunker in Moscow.

Brackets may be subject to change.

Red Bull BC One – related results