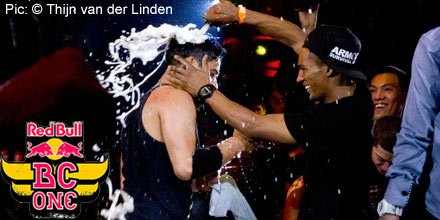 The Red Bull BC One 2011 winner is Roxite of Renegades, USA.

The Red Bull BC One 2011 Russia world finals took place today in Moscow where RoxRite defeated Lil G in a heated final to win the title.

After the event RoxRite was awarded the winners belt and called his victory against Lil G “A blessing.”

Top 16 b-boys were bracketed and the competition followed a knockout tournament after arriving earlier this week to warm up.

Update: Red Bull BC One 2011 photos and video

Hong 10 led as the most popular b-boy in a public Facebook poll but was knocked out by local b-boy, Yan the Shrimp in the knockout rounds.

Meanwhile, 2010 champion Neguin was knocked out by RoxRite  in the semi final, preventing him from winning the title again.

Red Bull BC One 2011 Russia results

Winners are highlighted in bold with the judge’s votes

Past Red Bull BC One results